Mr. Basque: A Look Back at William Douglass’ Years Studying the Culture 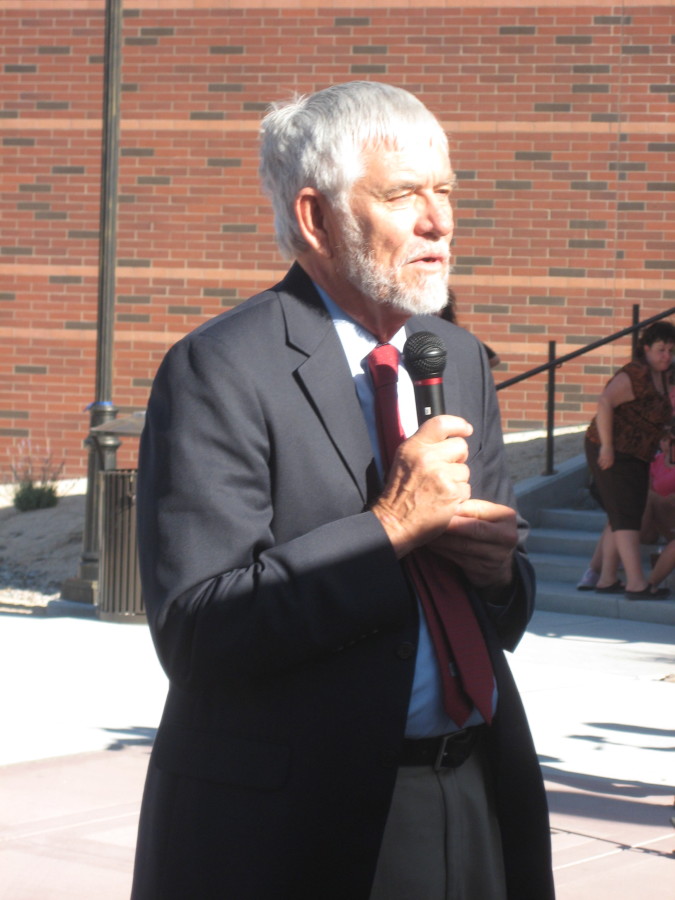 William Douglass speaks at dedication of Center of Basque Studies in 2009.

He’s known as “Mr. Basque,” a scholar who has dedicated a lifetime to researching and promoting Basque people and their unique culture.

William A. Douglass may not be Basque, but he has arguably done more than any single person in the United States to promote the study and understanding of a people who have left an indelible cultural mark across the West. He’s the author or editor of more than a dozen books and many more articles on the Basques, as well as a founder and long-time director of the Center for Basque Studies at University of Nevada Reno.

“That center has a national and international reputation and that is largely due to Bill,” said Dr. Sandra Ott, a UNR professor who has worked with Douglass for many years.

Douglass retired from his job as head of the Center for Basque Studies at the University of Nevada Reno in 1999. But the social anthropologist admits he never actually retired from working or from pursuing his interest in the Basque culture. In fact, he jokes that retirement is one thing he’s never been good at.

Now a professor emeritus of the university, Douglass recently reflected on his groundbreaking research and latest projects.

During a recent phone interview, the 80-year-old Douglass noted that he just finished a semi-autobiographical manuscript for a novel about casino life, is awaiting publication of a piece on the pastorale in the Basque academic journal Boga and is working on a book idea on the sports-fishing industry in several underdeveloped countries. Fishing is a long-time hobby of his.

Asked which of his books on the Basques were the most important of his career, Douglass said the most significant is “Amerikanuak: Basques in the New World” (1976) which he co-wrote with bibliographer Jon Bilbao. (Click here to buy the book from Amazon.) This seminal book on the immigration of the Basques to the Americas stimulated a whole generation of new scholarship. The book documented the impact of Basque settlement in South America as well as the American West. Douglass and Bilbao received a lot of recognition in the Basque world for the book. “It got me a whole other amazing honor,” added Douglass. “My alma mater (University of Chicago) gave me “distinguished scholar award” (2018) for having founded a field of study — Basque immigration studies.”

His first book, “Death in Murelaga: A Funerary Ritual in a Spanish Basque Village” is important for a different reason. This book, written during the time of Spanish Gen. Francisco Franco’s dictatorship, influenced a generation of Basques who subsequently became important writers such as Joseba Sarrionandia, Mariasun Landa and Bernardo Atxaga. “They were amazed that a non-Basque would come to a rural village in the Basque Country and write about it,” Douglass said. “They were under a lot of pressure to write in Spanish.”

What He Says About the Basques

After dedicating a lifetime to studying the Basques, Douglass reflected on one of the most remarkable aspects about the Basque people.

“One of the things I’m struck by is that we are even having this conversation, that we can even talk about Basques in the early 21st century,” said Douglass, explaining that the unique culture has survived despite a history of repression and pressure to assimilate.

Considered the earliest Europeans, Basques date back to prehistoric times. Throughout history, the Basques have been subjected to relentless pressure to assimilate into the surrounding cultures. During the era of  Franco (1936 -1975), there were persistent, state-sponsored efforts to oppress the Basques and their culture. Plus there is the fact that in recent history most Basques have attended Spanish or French schools. “Essentially, they should have disappeared as a distinct people,” said Douglass. He attributes their survival to Basque stubbornness or ethnic pride.

“The Basques have a keen sense of ethnic identity,” he noted. “It’s not true of all Basques but enough of them to keep the flame burning.”

The professor emeritus points to their practice of opening Basque hotels in the communities where they immigrated as a key to their survival. “They went all over the world to every inhabited continent and wherever they have gone, they have set up an ethnic network,” Douglass said, referring to Basque boardinghouses, associations, restaurants and clubhouses.

These places have provided an ethnic safe haven and network, “a place where Basque Americans have a place to go to charge their ethnic battery,” Douglass said. These social venues for dances, baptisms, weddings and funerals are even more important for Basque-Americans because few of them speak Basque.

Basques feel they share something special when they meet with other Basques, Douglass pointed out. That “Old World identity” doesn’t do the same for other immigrant groups, like the Irish or Italians.

Emigration from the Basque Country has dwindled significantly and it remains to be seen whether the descendants of immigrants will maintain these ethnic networks. Douglass says he can’t predict. “It’s up to the generation that hasn’t been born yet.”

Columbus May Have Been Basque

He had been doing anthropological studies in the Basque Country when Basque-American author Robert Laxalt asked him to help found the Basque Studies program in 1967. The first years were fraught with searching for funding. But during Douglass’ tenure, Basque studies at UNR bloomed, transitioning from an undergraduate program to a PhD program. The center’s library, led by Bilbao, started with 3,000 volumes and eventually included over 50,000. A Basque Book Series was published. Douglass has called himself “a facilitator,” bringing together many people over the years who contributed to the advancement of Basque studies and the UNR program. In 2015, Douglass’ contribution to Basque studies was recognized when the University of Nevada renamed the Center for Basque Studies after Douglass, and the center’s Library was named after Bilbao. (Read UNR article about the naming here.)

For the advisory board of the Center of Basque Studies, Dr. Ott noted that Douglass has been “a beacon. He generates a deep respect from our Basque American board members.” In addition, “I’ll always be grateful to him for being a mentor to me,” said Ott, noting that Douglass, via correspondance, connected her with someone in Ustaritz which led to her first anthropological field study in Zuberoa.

During his career, Douglass has also pursued other interests besides Basque studies. He conducted anthropological research in rural Italy and wrote books on his research. “I am an ‘Italianist’ for both an academic and popular audience that is scarcely aware of my Basque work, just as my Basque following scarcely appreciates my Italian work.”

Douglass’ family was involved in the casino industry that dominates Nevada life, in the ownership of two casinos, the Riverboat and the Comstock, both of which eventually went bankrupt in the 90s. Douglass, who is originally from Reno, has also written about the gaming life and today is part owner of a small casino arcade business.

Most people, however, know him as “Mr. Basque,” because of his 33 years as head of the Basque Studies Program. Miel Elustondo, a Basque journalist, spent a period of 10 years interviewing Douglass and wrote a book titled “William A. Douglass: Mr. Basque.”

A little known fact about Douglass is that he was involved in the early stages of negotiations for an ETA ceasefire. In 2003, he was tapped by a private Swiss diplomacy organization, an invitation he initially refused. He felt that as an academic, he needed to be impartial. But the Henri Dunant Centre refused to take no for an answer and paid for him to visit their center in Geneva. Douglass said that when he saw negotiations taking place there between Israel and Palestine, he changed his mind. He reached out to the Basque Lehendakari Juan Jose Ibarretxe and the Minister of the Exterior of the Basque Country to make sure they would be supportive and made a connection with ETA, which sent a representative to meet with him — an anxiety-ridden moment. Those efforts “got the ball rolling,” he said, although they eventually fell through.  ETA and the Spanish government later renewed negotiations that resulted in a temporary ceasefire in 2006. “They were standing on our shoulders when they did it,” said Douglass. (Read Douglass’ account of the negotiation.) A permanent ETA ceasefire was finally declared in 2010.

Douglass first ventured to the Basque Country in 1963. During the early years of his anthropological studies there, he spoke passable Euskera, but admits he’s lost fluency since then. “There was a time when I could interview people in Basque when I was doing my field research. I don’t have much occasion to speak it.” He has kept up his fluency in Spanish, which has been very useful over the years.

Douglass recently wrote two more books about the Basques, and edited and translated an anthology of poetry “Prisons and Exiles” of renowned Basque author Joseba Sarrionandia. He researched the Basques in Australia, many of them who went there to work on the sugar cane industry and published “Australianuak: Basques in the Antipodes,” an overview of three centuries of history of Basques in Australia. His book “Arana” regards a Peruvian-Basque rubber baron who became the subject of a major international scandal at the beginning of the twentieth century.

Will he continue to write on the Basques? “I don’t know if I will again,” he said. “I’m working on other stuff,” he said, indicating the research he’s doing for the sport fishing book.

How is he passing the time these days? “Pinned down at home, like everybody else, because of COVID.”

His work on the fishing book has been stymied by the coronavirus. Three different fishing trips  have been cancelled. A trip to Russian was postponed, then cancelled, and two others to the Cook Islands and the Central African Republic were also cancelled. He’s hoping scheduled fishing trips to the Seychelle Islands next February, the Everglades in March and Bolivia next June will continue as planned.