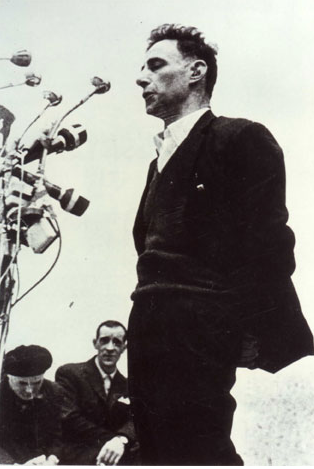 Fernando Aire Etxart, better known by his house name Xalbador, was one of the most loved bertsolaris of the Basque Country and in the Basque-American community as well. Xalbador was born June 19, 1920 in Urepel, in the Aldudes Valley in Baxe Nafarroa. Many of the Basques who immigrated to California and Nevada were also from this valley and identified with Xalbador due to his BaxeNafarroan dialect and his rural background as a sheepherder. He had to leave school at the age of 11 because his help was needed on the farm.

Bertsolaris are singers who compose impromptu verses (bertsos) in Basque on a wide range of topics. This is an art that these specialized singers develop from a young age. The art of bertsolaritza has become very popular in the Basque Country, demonstrated by the growing interest in the Bertsolari Txapelketa Nagusia, a Basque Country competition held every four years that attracts up to 15,000 people. The singers typically make up heartfelt verses about topics such as life, family, farm life, nature and faith. They are admired for their quick ability to come up with compelling verses that rhyme. Xalbador was one of the best. Xalbador began performing at the age of 16 and won many contests.

In 1960, Xalbador and another well-known bertsolari, Mattin, came to California and were visiting the local Basque communities. On one of those occasions, they were singing their bertsos at a festival in the San Francisco Bay Area hosted by an organization of French gardeners. (Many Basques worked as gardeners.) Without warning, someone in the organization cut off the microphone. Several Basques in the audience, who recognized the importance of the men’s performance, were angered

That evening, a group of them, including Xalbador and Mattin, gathered at their countryman Claude Berhouet’s restaurant, Hotel de France, in San Francisco. The group decided then and there that they needed their own organization, and the San Francisco Basque Club was born. Today, portraits of the two singers hang at the Basque Cultural Center in South San Francisco in honor of the role they played in founding the local Basque club.

Xalbador is particularly remembered for a competition in Donosti held in 1967. When he, along with the other bertsolari Uztapide, were announced as the final two winners of the competition, many in the audience booed and whistled at him and did not support his win. Much of the opposition was due to the fact that he was not from Gipuzkoa and did not sing in the local dialect. His response was to make up verses in the Gipuzkoan dialect of the audience, instead of his Nafarroan dialect. His first line, in particular, won over his audience when he said to them: “Zuek ezpazarete kontentu, errua ez daukat ez nik, txistuak jo dituzute bainan maite zaituztet orainik. If you’re not happy, it’s not my fault because even though you whistled at me, I still love you.” This heartfelt line along with his use of their dialect won them over. Indeed, Xalbador has remained a favorite bertsolari among Gipuzkoans and was remembered for uniting bertsolaris from both sides of the border.

This event took place just as the standard Basque, Batua, had been created and was being promoted yet was still a novelty and a cause of friction among the older generation who only spoke in their own dialects. Xalbador’s recognition of the differences in the dialects and his ability to make the switch was a testament to his talent as a bertsolari. Years later, members of the jury admitted they wanted to choose him as the winner, but didn’t dare because of the audience’s negative reaction, according to a news report from EITB. That injustice became part of the history of the bertzolaritza, in particular because he went the furthest of any BaxeNafarroan in the competition.

What is the Basque Country?

Xalbador died at the young age of 56. Xalbador was being celebrated for his work as a bertsolari and poet on the day he died – Nov. 9, 1976. He had reached almost mythic proportions by this time. He had just released a second book of poetry. It was a Sunday in Urepel, and cars lined up on the road for 4-5 kilometers to reach the event. People from all over the Basque Country had come to celebrate the poet singer. After a mass and a luncheon attended by 600 people, the afternoon was given over to bertsos and the homage to Xalbador. Around 6 p.m., Xalbador left the event in the fronton because he did not feel well, and died of a heart attack a little while later. Jesus Ceberio of El Pais called Xalbador possibly the best bertsolari the Basque Country had ever produced at that time.

An celebration known as Xalbadorren Eguna (Xalbador Day) is held annually in October in Urepel. Well-known singer and composer Xabier Lete wrote a popular song about him, “Xalbadorren Heriotzean,” after his death. Read about this beloved classic song here.

His granddaughters currently have a singing group known as Aire Aizpak. Learn more about them and one of their songs, Konplize Ditut Eta

**Disclosure: links in the article are affiliate links which means at no additional cost to you, we earn a commission if you click through and make a purchase. These are all products that we recommend.